In Memory of Willard

Home » Team » In Memory of Willard 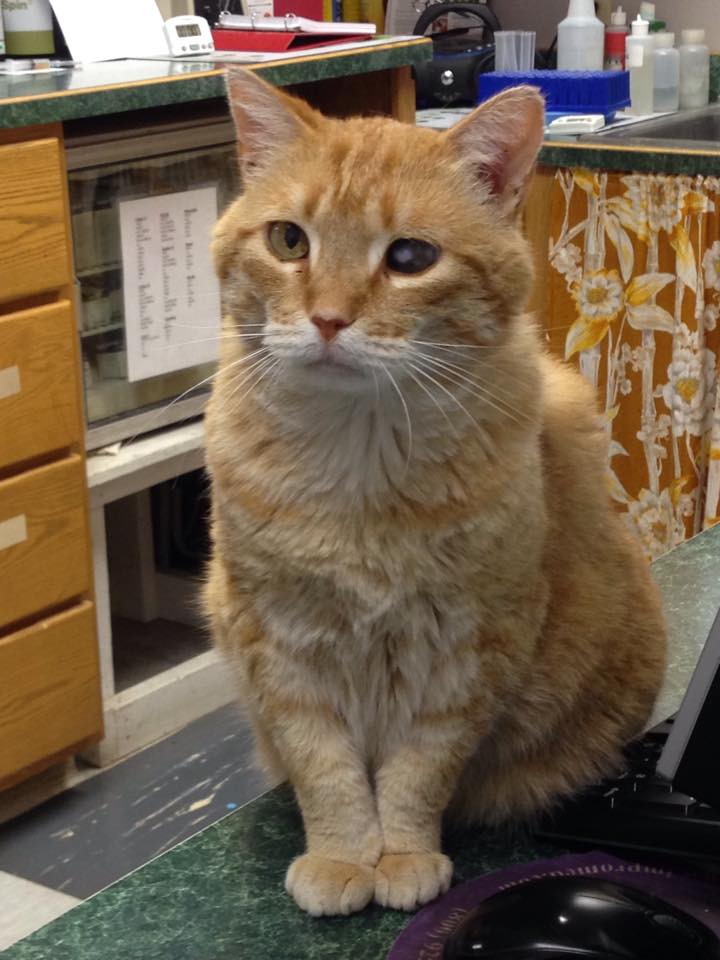 Greeter of the equine treatment area, supervisor of the stalls, and the mouse watcher of the arena is how I would describe our Willy. He was also a very fat and lazy cat that despite being on a constant diet didn’t lose weight. However, how can you lose weight when despite being fed his daily amount he would go to certain people (too many people to list names) and meow or be under foot until he was fed?  He also was a very talkative, old, crotchety cat with a sense of humor. Everybody that came into the equine would be greeted with a meow and a roll over to pet his belly. He was very patient when there were kids that would pet him. When he had enough, he would just get up and leave.

We really don’t remember who adopted who or when he started to call Casselton Veterinary Service as his home. All we can guess is that he has been here for at least 10-12 years and our rough guess he was about 13-15 years old.

When he first started to come around, one of the doctors lived in a house behind the clinic. She fed him and took care of him until she got married and moved away. The staff of Casselton Veterinary was used to seeing him around and little by little started to feed and take care of him. He lived in the old equine stall area until we built onto the clinic. Then he became the sheriff/supervisor of the equine area.

In Willy’s younger years he was a little bit of a Naughty kitty. He would act sweet and rub on your legs, purring and then would “attack” a certain technician. I have only seen him play roughly with this certain technician. When he climbed up her leg with claws and teeth and made her squeal for help, I’m pretty sure he smiled when he jumped off her leg. The rest of the staff that was there and witnessed the incident could not help because of the fact that they were belly laughing on the ground.

Willy’s was our mouse catcher in the hay or straw when he was younger. When he started to get older it was a little harder for him to accomplish his job and needed some help. There was a mouse in the feed container. A technician wanted to get it out so they placed Willy in the container to get it. He caught it, but he couldn’t get out so the technician had to help him and scoop his butt up and out. Another time there was a family of mice in the container and a technician put him in it to get the mice. He got all of them that he could see but one mouse kept hiding under Willy’s butt as he sat. Every time Willy would move, so did the mouse. That time Willy needed some help to finish his job.

In his older age I believe that Willy thought people, other animals, and vehicles should go around him, and he didn’t need to move. He was stepped on and cussed at often. There was a certain doctor that Willy liked to antagonize by not moving, by getting under the horses (at an inopportune time), or would meow excessively. Also, a certain doctor would aim the vet truck for him when driving into the equine treatment area. Thank goodness Willy could move faster at that time. Later on Willy would not move and would duck for a vehicle to go over him.

In his old age, Willard would love to sit in the sun and watch the world go by. Once in a while, he would wonder the bean fields and cross the road to see what was on the other side. He also loved to sit in the Lab on a blanket, on the lab chair, or at the receptionist desk and watch the comings and goings of the day.

One Christmas a bright technician thought we should give Willard a bath. He verbally objected but didn’t protest too bad until it was time to dry him off. Another technician was drying him off with a bath towel, picked him up and then he proceeded to pee down the technicians leg, as a thank you.

Many people have fond memories of Willy and the BATHROOM in equine. He sometimes would like to sit behind the toilet or the door and scare people when they are trying to “GO”. Sometimes a person would have to wipe the toilet seat off because there would be dirty Willy paw prints on the seat. Another memory is when you are in the bathroom, Willy would sit outside of the bathroom and put his paw under the door and bang the door and meow until the person came out and gave him attention. Then there was the unforgettable picture of when the paper towel dispenser in the bathroom was on the frits and left a pile of paper towels on the floor in the bathroom. Someone put Willy on the sink and took a picture of him and framing him for the incident.

With Willy’s aging body someone had a good idea to try to rehabilitate his body in the underwater treadmill. He was not impressed when we placed the pink life jacket on him for safety. Needless to say, his physique in a life jacket/bathing suit was pretty funny to see. He was not impressed with the technicians and would not move. He just laid on his side. Then we tried to teach him how to walk on the underwater treadmill. He was leery of the whole experience but when the water came in the treadmill and touched his feet he was out of there. He squeezed out of the life jacket and literally tried to scale the walls and jump out of the treadmill. I don’t think I have even seen him move that fast in his life.

Willy will never be forgotten with all of the fond memories and funny stories that the staff at the Casselton Veterinary Service have.